Technology: a force for harm or good?

There are multiple aims driving change during the Age of Transformation. Dialling back inequality to create a more inclusive society is one of them and success would mean improved working conditions and better social prospects for all. Such an outcome would inevitably create a more prosperous economy and would lead to significant investment opportunities.
Technology is often seen an enabler of a more equal society. Not only has it revolutionised how we live every aspect of our daily lives, but it has become the biggest segment of the market in terms of valuation. The digital economy is estimated to be worth $11.5 trillion globally which is equivalent to 15.5% of global GDP and has grown two and a half times faster than global GDP over the past 15 years1 .
Technology-inspired disruption may be coming thick and fast, but are these changes positive for every part of society? Or is technology serving to increase social disparities? If so, is this something investors should consider?
A tech utopia…
To say that technology has changed our lives this century would be an understatement.
The smart phone has relieved us of having to carry around numerous heavy devices and provides us with access to the internet from almost anywhere. Its reach has also been broadened to encompass every social group and geographic region. Currently, more than 6.5 billion people use a smartphone, which translates to a staggering 83.9% of the world’s population2.
Number of smartphone users worldwide is growing including in emerging economies, where younger people are leading the way in smartphone ownership. 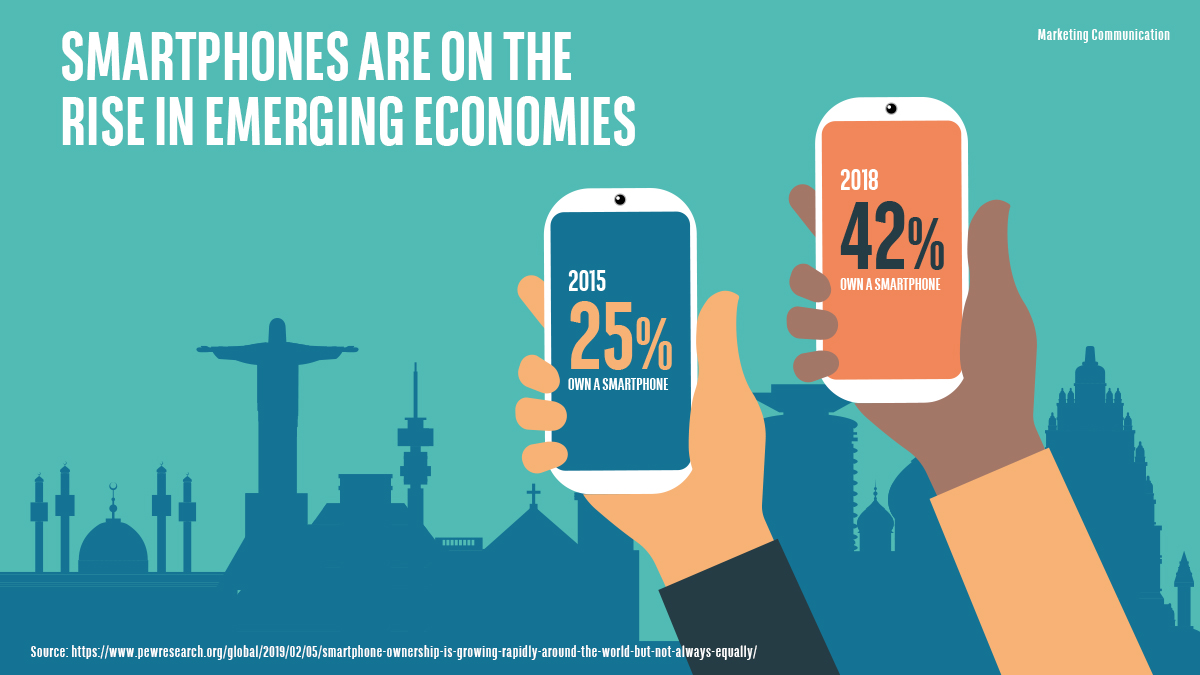 Social media has given a voice and a platform to otherwise marginalised groups and has led to social movements including #MeToo, Black Lives Matter and the Arab Spring. Cloud computing has empowered small and local businesses to compete with their larger peers, offering rapid business formation and expansion, and provided a platform to reach a much wider consumer base than otherwise offered by a bricks and mortar set up.
Augmented reality has enabled more surgeons to undertake complex medical procedures, as well as reduce operating times. And artificial intelligence played an integral role in the speedy research on Covid-19, as well as numerous other health innovations.
These are all areas where the advancement of technology has had an undoubtedly positive impact on everyone’s way of living.
…or a tech dystopia?
Yet, there has definitely been a darker aspect to the technological revolution of the 21st century.
The proliferation of smart phones – even in third world countries – has allowed technology companies to capture data on our every move. Not only has this data been used to monetise our information without our knowledge, but it has also resulted in data breaches and has been linked to the manipulation of users.
Algorithms – the instructions that underpin many digital tools – have been shown to have unfair biases (often racial and gender-orientated) or had inadvertent outcomes that have resulted in negative consequences. Social media has enabled the spread of fake news and misinformation, as well as providing a platform for hate speech and threatening behaviour. Authoritarian regimes have consistently demonstrated how digital tools can be used to survey and control the populace.
And rather than equalising society, wealth inequality has widened enormously during the last 20 years. While this can’t be directly attributed to technology itself, the entrepreneurs behind technology have certainly benefitted. Of the world’s 2,755 billionaires, 365 made their fortunes through technology and their collective net worth (at $2.5 trillion) far exceeds that of any other sector3.
Weighing the good versus the bad
In many tangible ways technology has delivered on its great promise of inclusivity. It has empowered emerging countries to catch up with their developed peers, offering greater access to education, health and information to populations that otherwise were previously being left behind.
Technology enables us all to have a voice. Not just relating to important social movements, but tech companies encourage us to review products and rate services. It also helps us save both money and time. Whether that’s through price comparisons, smart energy meters or just by making our lives simpler.
At the same time, technology has been tainted by its role in election tampering, surveillance and widening inequality. The major technology firms have been at the centre of debates around unfair trade practices, discrimination in the workplace and tax avoidance. Research has shown that the big six US technology firms paid just $219 billion in income tax over the past decade, that’s a mere 3.6% of their total revenue of over $6 trillion4.
So the question is whether these issues are the fault of technology itself or has it just been misused?
Time for regulation?
Of the many unanswerable questions surrounding technology and its potential for inclusive growth, how the industry can be regulated tops the list. Many of the world’s governments are currently implementing plans for greater governance of technology companies and digital platforms. Options for regulation include:
Unfortunately, none of these options has a neat solution. They would all involve trade-offs of some kind.
Balancing investment opportunities, risks and responsibilities
The struggle with trade-offs and principles also dovetails with the role of a conscientious investor. While we want to benefit from the growth potential of the technology sector, a responsible investor needs to consider the company practices from an Environmental, Social, and Governance (ESG) standpoint:
Embracing responsible tech
Whether you believe technology enables equality or not, it is an important sector in modern society that provides clear investment opportunity.
At BNP Paribas Asset Management we have made equality and inclusive growth a central tenet of our sustainable growth strategy. We believe technology provides a viable pathway to achieving this aim but recognise there are downsides as well as upsides to the tech explosion.
Our active management approach means our investment experts investigate technology opportunities. To us, research, transparency and engagement are the key tools to mitigating the risks posed by the technology sector. To achieve sustainable investment returns for our clients, we need to identify companies whose business models will benefit all stakeholders, including society as a whole.
1https://www.brookings.edu/research/trends-in-the-information-technology-sector/
2 https://www.bankmycell.com/blog/how-many-phones-are-in-the-world
3 https://www.forbes.com/sites/kenrickcai/2021/04/06/here-are-the-richest-tech-billionaires-in-2021/?sh=2b35e0b64d70
4 https://www.theguardian.com/business/2021/may/31/silicon-six-tech-giants-accused-of-inflating-tax-payments-by-almost-100bn
Watch video
Follow us

To find out more about the investment themes discussed here, please complete the form below.

Get insights straight to your inbox.

This website is launched and published by BNP Paribas Asset Management, as defined at the bottom of every page of the website (the “Company”) Opinions on this website are the judgement of the Company, at the time specified and may be subject to change without notice. The Company is not obliged to update or alter the information or opinions published on this website.

By accepting this disclaimer as set out below, you acknowledge its content as being the mutually agreed terms for your visit of and the use of this website. Whereas the term “website” includes all content and data provided and all sub- and micro-sites of this website. Further, as a user of this website, you acknowledge, that you are responsible for ensuring that the legislation applicable to you in your jurisdiction permits you to consult this website and you represent and warrant that you have the necessary means and skills to access this website and use it in the intended manner only. This disclaimer is subject to changes without prior notice. If any of the provisions of this disclaimer are judged to be illegal or unenforceable, the continuation in full force and effect of the remainder of them will not be prejudiced.

The Company is authorised and regulated by the Financial Conduct Authority as an investment firm. The Company does not offer or purport to offer any direct lending or credit facilities to UK borrowers in connection with the SME Advanced Solutions platform or otherwise. Any potential borrowers should note that non-consumer loans and similar credit facilities are not regulated investments under applicable UK law and that non-consumer lending is not a regulated activity in the UK.

The Company disclaims any liability for any decision made on the basis of any information contained on this website. Potential investors and other market participants are encouraged to consult their own investment or financial advisers in connection with the purchase of any financial instruments or investment services or the entry into any borrowing or similar arrangements.

The Company including its parent company, subsidiaries, associated entities, directors, employees, representatives or suppliers, does not accept any responsibility arising in any way for errors in omissions from the information on this website and does not accept any liability for any loss or damage as a result of any person relying on any information on this website including any information provided by any third parties or by any inability to access this website at any time, except in the event of intentional or serious blame on its part.

All externally sourced information has been obtained from providers believed to be reliable, but its accuracy, timeliness, suitability and completeness is not guaranteed. For further information on fund(s), please contact the Company.

The information and data featured on this website is protected by law. Copyright and other intellectual property rights on this website (including registered and unregistered trademarks, brands, texts, graphics, logos, icons, sound recordings, software, etc.) are owned and licensed by the Company. You may use and / or print off the data solely for the purpose of personal, non-commercial use. You may not in any form or by any means:

without the express prior written consent of the Company.

By visiting this website, information on the access (e.g. date, visited sites, duration, IP-address) can be registered. Such data will be used in accordance with Cookies Policy of the website and will not be passed on to third parties neither for commercial nor for non-commercial reasons. By accessing this website you hereby agree, that the Company and its affiliates may record and process any personal data that you submit and which relates to you for the following purposes: customer management, including new business prospects, management of the contractual relationship, the prevention of irregularities, generating statistics and tests,. You also agree that this data may be passed on to all entities associated with the Company for the same purposes or to other persons in order to comply with any statutory obligation, or in the event of legal interests. You also agree with such notification, should the receiving person or entity be located outside the European Union, regardless of whether an adequate level of protection can be guaranteed for personal data in the country of receipt.

Within the Company and its affiliates, access to any of your personal data is restricted to those persons who need this data in order to fulfil their duties.

The option to use email to contact the Company is just one of the convenient features offered by the Company. You will be aware of the limitations regarding the reliability of sending and receiving emails, as well as the accuracy and security of email traffic, so you will understand that the Company cannot be held liable for any loss or damage arising as a consequence of queries which are not received, confirmed or processed, or as a result of the fact that your email may be intercepted by third parties. As a result you are expressly advised not to send any sensitive information via email, because it may not be secure. However, if you do so, it will be at your own risk.

Applicable legislation and jurisdiction in law

Your access to, visit to and / or use of this website and this disclaimer are governed by and will be interpreted in accordance with France legislation. The courts of France shall have sole jurisdiction regarding any dispute in this regard, notwithstanding the fact that the Company may choose another court that has jurisdiction regarding a similar dispute in accordance with an applicable item of legislation.

By clicking “Accept”, you acknowledge that you understand and accept to follow the terms and conditions of use.
Decline
Copy link
CopyCopied
Powered by Social Snap